New, to FIFA 20, is EA’s upgrade to the first touch control system and here’s how you can get your head around it quickly. There have been a lot of variations in the past, but these changes to this first touch can be enormous in creating space for yourself on the pitch, just as it is essential in real life.

How it works:
A lot of these new moves feature different combinations of buttons being pressed when receiving the ball and often before. You must get used to doing things before the ball arrives to get the most out of these tips.
The tips: The Soft TouchThe more uncomplicated of first touches to master. Just use the left analog stick. First touches are more responsive this year, and with players like Isco and David Silva, the use of only the left stick to perform the soft touch can easily see you create a yard of space or turn your man, particularly if the opposition are pressing every pass you make.

Use of L2 TIP
Take a double touch with the right stick, where you have space, and then you’ll have time to power up the shot and then time the finish when your player is moving onto the ball. Perfect from long range and one v one situations with the GK.The Sprint Touch Unless you have a lot of space.

TIP – Take a double touch with the right stick, where you have space, and you’ll make the brush even bigger. Perfect to use in scenarios like the picture below (RT + R on Xbox).

Should only be used when running in the same direction and there is a lot of space to travel into. 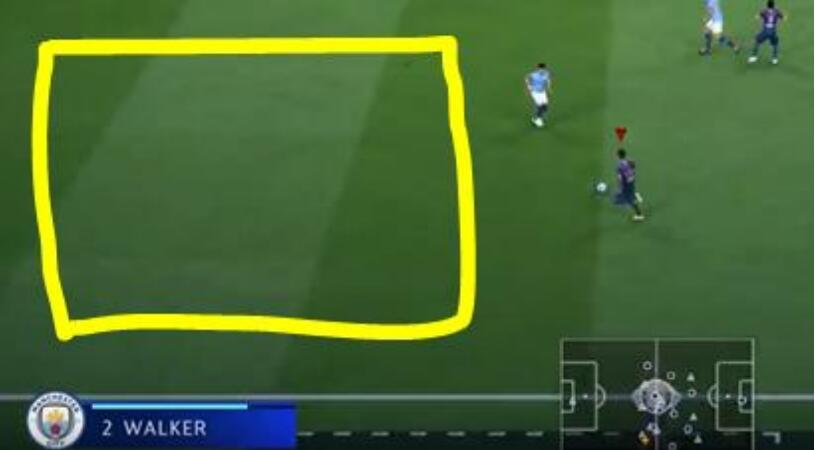 So, there you have it. FIFA 19 introduced this timed finishing to increase the skill gap and give the players who do use it the added advantage of being able to have higher accurate shots etc.

The New Turn/Touch/Tricks
Performed by holding R1/RB one of the original controls (finesse button). Hold the pin before the ball arrives and then the desired direction you wish to take the touch with the left analog stick. Keeps the ball very close and performs some beautiful new turns to trick your opponent.

The dummy
Hold R1/RB as well as the left analog stick in the direction that the ball is traveling from to make your player dummy the ball and let it run through their legs. Holding the same direction will get your player turned quickly and is a great way to beat a man on the wing.

TIP – AS SOON as the ball is through your legs let go of R1/RB and get on sprint. This will mean that your player turns that little bit quicker and gets moving, especially if they have great reaction and agility stats!

TIP #2 – If you hold the R1/RB button with no direction pressed you to dummy the ball, but your player opens his legs and lets the ball run through. Again, great under
pressure, particularly if you have full-backs who join in the attack.

The flick touch
Introducing some flair to the game can be great fun and a great way to make space for yourself. The longer you hold the bat before the ball arrives, the bigger the bit. Can make fools of your opponent by doing this!

You are juggling on the run!
If you want to flick the ball up, then you can click R3. All that is just pressing the right analog button down as the ball arrives at your player. If you want to carry on juggling the ball, you keep clicking R3, but this is quite useless in a game, to be honest.

TIP – If you want to take the mickey out of your opponent, you can now move and juggle at the same time! To perform this, keep clicking R3 down, with the left analog in a direction and the sprint button pressed as well!

Fake shot first touch
U4GM know we’ve got this covered, but it is one of the most useless techniques, and you can combine with the new L1 artificial shot variation so we’ve included it again with a picture so there’s no way you can miss it! You’re welcome! 3-5 meters before the ball arrives at your player, like in the movie, is best.

Usually, they’re not worth the difficulty for motives that are enough inside the long run. While they may be valuable for players who may well know nothing at all concerning the game. For one of the most portion, they are learning tools for beginners to ease them into FIFA 20. For more FIFA 20 Guide, you’ll be able to stop by U4GM.com. Just a reminder: you can get 5% coupon code for free from the reps in the event you Obtain Cheap FIFA 20 Coins from this short article.